ICX / sICX market is a compounding machine, great for long term holders that want to increase their stacks in a low risk manner.

I’ve always thought this market is understated because the UI hides the staking rewards, this is a non issue for older Omm users + long term ICX holders who understand that all is auto compounding under the hood, but for newer / less savvy users this is not obvious at all.

This image shows one of many way this can be improved. 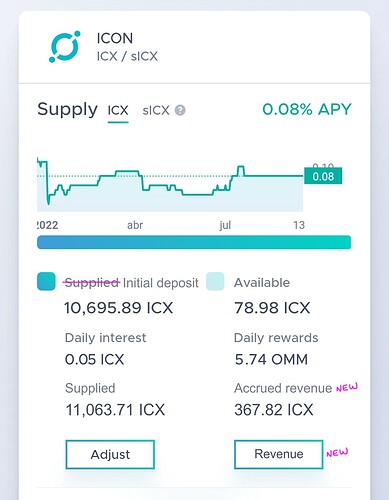 Note that I also propose a button to claim the accrued revenue, giving depositors easier control and the sensation that there are fruits growing from the tree.

By the way if this is well received, the “grab your fruits from the tree” concept could be extended to all markets. Stating what the initial deposit is, and if you claim your revenue you go back to that amount.

Thanks for the suggestion!

Because you have a static amount of sICX, it’s not possible to “claim” your staking rewards unless you withdraw and unstake sICX (which disrupts the compounding process). It could also be confusing to add an optional claim button to each market just to track your earnings, but we have wanted to provide more historic data for performance details, so now that we’re a year on from launch we’ll revisit this to see what’s possible.

Will talk with the team internally to work out the best way to address this with minimal changes to the current layout. At the very least, I’m sure there’s something we can do to better emphasise the ICX staking rewards.

Awesome sounds great Lisa! Yes, I figured it wouldn’t be possible to “claim” as you said as the sICX value doesn’t change (just it’s ICX value). Great suggestion from @Rook5677 though and it’d definitely be good if staking rewards could be reflected in some way in the UI without causing too many changes to the layout. It’s almost 8% APY which isn’t being reflected so when new users start coming in (hopefully with BTP) it’d be great if they could see this extra APY. It’d also help with any confusion around sICX (or make it a little clearer that they’re still earning staking rewards, albeit not traditional staking)

Good stuff guys, fully agree with keeping things simple so any improvement will be welcomed.

Great suggestion @Rook5677 ! I agree that ICX staking rewards can probably be better represented on the frontend, especially for new ICX holders.