To kick off the new year the monks thought of putting forward a proposal to reduce OMM’s overall inflation. We have been pondering this for a while, and whilst our original idea was to recommend directing some of the OMM emissions going to the liquidity pools to the DAO fund, we feel the biggest impact to OMM’s tokenomics lies in addressing the overall inflation. We are aware that reducing the OMM inflation will affect the APYs, and with already very low APYs, some may think this could be detrimental to the protocol. Well firstly with Karma’s bonds, Omm has been able to secure protocol owned liquidity. Secondly, most of the users that use the protocol will use it for the clear use cases and not for the APY. We think altering the OMM inflation may reduce the sell pressure on OMM. Reducing sell pressure would make locking OMM a much more attractive proposition, thus overall being more useful for the protocol. Before we put forward a proposal we thought we should get the initial sentiments from the community, and a bigger question we have is what level of inflation reduction would the community deem appropriate.

So currently daily inflation is at 300,000. If we wait without making any changes the daily inflation will come down to 200,000 per day in August of this year. So we thought lets not wait for August and wanted to feel the pulse of the community on this. We put forward a few options on the OMM discord , the results of which can be seen here Discord
The overwhelming majority wanted to go the aggressive route of dropping emissions to 100k OMM per day. After having seen initial community thoughts on it we thought we would even be open to look at recommending to bring down inflation to 50k OMM per day.
So the options are:

It would also be great if you could provide rationale for your decision and any other comments/thoughts you may have.

Thanks Arosh! I’d personally vote for 50K per day asap. I originally thought 100K per day would be aggressive enough but I think we should go as aggressive as possible as the current emissions are incredibly high.

This will of course reduce the APYs across the board but the high APYs were never sustainable in the long run. I also think that those invested in the long term success of the protocol will still primarily take advantage of OMM’s voting power (both ICX voting power and power in governance votes). I think this is a great step forward for the protocol

I agree that either 100k or 50k per day would be a good amount to reduce rewards to.

To clarify though, say we vote in 50k per day - what would be the new schedule of emissions?

What would 3% of total emissions look like currently? Would 50k be more or less than this amount?

If we did vote in 100k then we could essentially begin “year 4” from the date the vote passes.

*Please excuse my memory if this was already discussed in discord.

Good question. So current Omm supply is around 207.5M. 3% inflation would put it at around 17k daily emissions. So 50k would be higher.
We could make it 50k asap, and then move it to 3% inflation in August when the next emission change is scheduled for.

The next question would be when would be want the drop from 50K per day to 3% inflation…perhaps August of this would be too early and we’re best to wait until 1 year from when the 50K per day gets enacted? Either sounds good to me; again dropping to 3% as soon as August this year would be the more dramatic option

I would be more inclined to go for 3% after a year at 50k if we were to go this route but would be open to voting for other options.

Roughly calculated 3% inflation after a year of 50k starting end of this month would work out to be beginning close to 18500 a day.

Also, worth keeping in mind the distribution of these emissions: 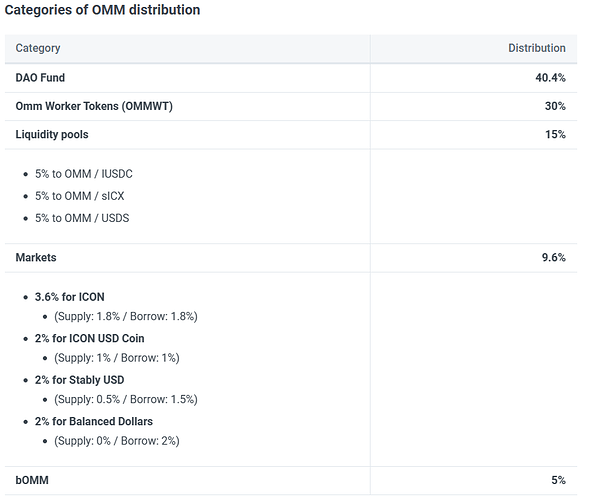 The sudden drop in rewards will dramatically reduce APY’s but the price of OMM tokens will no doubt rise a fair amount to somewhat even this out overtime.

In the short term this could spook some LPer’s but I imagine these LPer’s would be the ones dumping OMM tokens on a regular basis anyway.

Yeah good point! Anything we do with the overall emissions will have an impact on APYs. We are talking about a material drop in inflation, so the apys(including omm rewards) will drop. However those community members are long term aligned to the protocol, i.e. who have staked omm long term will definitely see value. It remains to be seen whether this will increase the value of Omm , difficult to say, but what is clear is this will considerably reduce sell pressure. It is natural to expect some users to withdraw their supplied assets etc as a result of apys dropping, but a large majority of those using omm is not using for apys , as it is already very low, but simply for the use cases of borrowing at low apys… This demographic of users will remain… Also hopefully this will encourage more users to lock their Omm.
The more we think about it the more we feel 50k is the way to go.

Of course , we cant think of reducing omm inflation as the be all and end of all. The monks are looking at putting forward a couple more proposals too.

Has consolidating OMM liquidity pools and markets been considered?

Liquidity Pools
I would say consolidating the Liquidity Pools to strictly OMM/sICX makes the most sense to me. Having both OMM/iUSDC and OMM/USDS is less capital efficient and just fragments liquidity and incentives. If a user wants to swap OMM to stables anyways Balanced can just route OMM → sICX → bnUSD

This looks like it would create an OMM/sICX liquidity pool worth $600,000 instead of three separate pools worth $200k (assuming all LPs consolidate). This would also reduce the need for OMM liquidity incentives from 15% → 5%.

I would imagine it would be easier to focus on POL of this specific pool as well, with 5% OMM incentives keeping external liquidity provided while using the DAO fund to gain POL via Karma and any protocol revenue to pair with OMM from the DAO fund and deploying it to the Balanced LP pool. Ideally this pool doesn’t need any incentives at all after a certain level of POL is reached

Markets
I would be curious to see how OMM incentives has increased TVL for the three stablecoin markets (bnUSD, iUSDC and USDS)

With the generally low rates (even w/ OMM incentives), my guess is a lot of people are using them to borrow against their ICX collateral. This organic borrow demand creates a natural APR for the supply side, so not sure if OMM incentives really move the needle.

I would be in favor of removing OMM incentives from stablecoin markets entirely, removing them from one market and monitoring its metrics, or removing incentives from iUSDC & USDS and directing them entirely to the bnUSD market

Are there any metrics on the current POL for Omm?

I think a good example of a protocol drastically reducing the emissions for liquidity mining is Marinade Finance, a liquid staking protocol on Solana.

Their community determined that the rewards weren’t really moving the needle in terms of TVL and they decided to reduce the amount of liquidity mining rewards they give out by 75%: 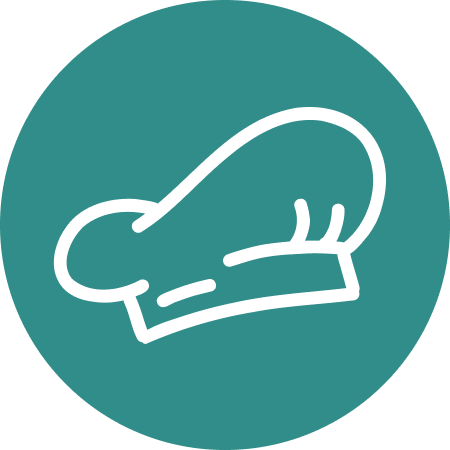 What do you propose? Reduce Liquidity Mining rate from 1M MNDE/week to 250k MNDE/week, 75% reduction What is the rationale behind the proposal? 77% of weekly liquidity mining budget is currently allocated to “Do not distribute” gauge ...

Really appreciate the feedback @tj_hunt !
Actually we (monks) were initially looking to address the emissions going to the liquidity pools and the markets. However we then thought addressing the overall inflation would be better served as this would

We were flirting with the idea of doing both together( overall inflation and reducing emissions to liquidity pools ) but decided against it for the moment.
I agree that with POL via karma there would no longer serve a need to maintain the same incentive levels for pools and we were considering bringing down emissions by 50% to these pools.
I also agree with you about the incentives to markets . The trend as you have mentioned is that protocols no longer offer incentives for participation in the markets. With apys so low, those participating in omm markets are for the use case you have mentioned and less so for the added incentives. So we will put forward a proposal later on this as well ,but we wanted to see for now the impact on behaviour by bringing down overall inflation.

In the coming weeks we will be putting forward a couple of other proposal discussions focusing on dao fund diversification, and revenue generation.

Ahhh thanks for the response Arosh! Looks like a may be a proposal too soon

I would be in favor of the option of dropping emissions to 50k per day asap, however I think one thing to consider would be whether the DAO feels capitalized enough in its treasury as it will likely be harder to raise inflation in the future.

Looking forward to the next discussion to discuss incentives allocation!