Whilst March was about Marketing, and April was about Community engagement via competitions, the month of May the focus has been about the Monks Collaborate NFT collection. We quickly realized with overall market sentiment being low, spending funds on marketing wouldn’t be the most optimal use of community funds. Furthermore, trying to spur community engagement in the current market conditions was not the easiest. So we decided the month of May will be used to create value for being a Monks Create NFT holder. We wanted to create a campaign around being an monks create NFT holder and the value it will bring to a holder.
Most of the work that was carried out for the month of May was in areas of growing the NFT collaborate collection and growing the Monks Create holders with a campaign around it which will help with community engagement and bring community members to Omm in the months ahead. We feel we have achieved that in the month of May where we have grown the Monks collaborate collection to 24 NFTs and we have given away 14 monks create NFTs.

56321 OMM tokens were spent on monks collaborate NFTs, engagement competitions and tipping community members in the month of May.

In May we revealed 5 new Monks Collaborate NFT’s via daily tweets, spotlighting the NFT’s and the collections of the collaboration creators.

@monksacademy
1/3 The 3rd Monks Collaborate reveal of 5 new collabs to be revealed is @M1ster_nice. 🎆 Not the biggest name yet in the Icon NFT scene, but his unique style and intricate designs will draw attention. We are very happy to welcome this Monks inspired design in our collection.

@monksacademy
1/4 The 4th Monks Collaborate reveal of 5 new collabs to be revealed is @RupertsRealm. Rupert perfectly reflects the Monks mission: elevate from collapsing CeFi and take control of your own finances through DeFi. We gladly welcome this Monks inspired design in our collection.

@monksacademy
1/2 The first Monks Collaborate reveal of 5 new collabs to be revealed is @RagePupsNFT OG. 🎆 This is one of the first popular collections on @craftdotnetwork and top tier based on trading volume alone. We are proud to welcome this Monks inspired design in our collection.

@monksacademy
1/2 The 2nd Monks Collaborate reveal of 5 new collabs to be revealed is @_StudioMirai Tamashi. 🎆 Tamashi collections have a strong community and are scooped up in seconds after they have been minted. With pride we welcome this Monks inspired design in our collection.

@monksacademy
1/4 The 5th and final Monks Collaborate reveal of 5 new collabs to be revealed is @RagePupsNFT. Same artist as our 1st reveal, but new collection. The new collection has only recently started minting and has already achieved the same trading volume as the OG collection. 👀

The Monks also took part in minting Claws and Yeti’s (YTSC) during pre/public sales. These NFT’s will also be raffled to Monks Create NFT holders, as per planned Monks Collaborate NFT’s distribution.

Both events have attracted attention and many have asked how to obtain Monks Create NFT’s. The Omm discord has hereby seen many new faces join.

The Monks have announced the first raffle will be held on Eye on Icon, the premium ICON news media, for highest visibility. Other raffles will be held both during Monks Academy sessions and Eye on ICON episodes.
June will be an exciting month for Monks Create NFT holders with several raffles kicking off the long awaited distribution of our NFT collection.

We conducted three Monks academy episodes for the month of May.
We had approximately 10 to 12 participants per session for each live session and the engagement was extremely good. With our last live session having on average around 30 participants listening in, with 50 people at its peak.
The first for the month of May was on stablecoins, where we even spoke about $UST and whether it would cause the collapse of LUNA days before it actually did.

@monksacademy
🎙️Understanding Stablecoins With ICON BRIDGE imminent, we thought we should talk about stablecoins: 🗣️ Different types of stablecoins 🗣️ Stablecoins on the BTP partner chains 🗣️ Any truth to the latest stablecoin FUD? Join us! 🗓️WED 4th May, 5pm GMT #monksdaofund #ICONProject 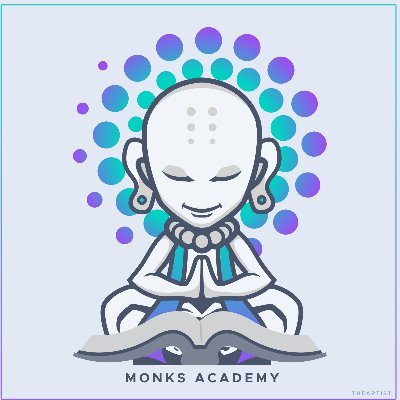 On the next Monks academy episode the topic of discussion was bOMM testnet:

@monksacademy
This week we will be talking about: 🎙️Boosted Omm Testnet 🗣️ Taking you through testnet 🗣️ Features of Boosted Omm Join us! 🗓️WED 11th May, 7pm GMT As always we will have NFTs and $OMM to give away! #monksdaofund #ICONProject

The focus for May is to have learning episodes focused on stablecoins in preparation for ICON Bridge and also on Boosted OMM.

We launched engagement via our weekly monks quiz competition giving away Common monks NFTs. On average we have been having around 50 people participating in the quizzes.

We spent 56,321 OMM tokens for the month of May bringing the total amount of OMM tokens spent/locked to 341,700 OMM over the three months, with multisig payments for June and Monks website budget yet to be spent on. OMM tokens have been spent in the areas of marketing, community engagement competitions, and NFTs.

With a treasure chest of ICON NFTs at our disposal and an engaged monastery of Monks create NFT holders and Omm Monks, we will be looking to continue the next phase of growing and creating value for the Omm community.

Well done @Arosh , looking forward to continuing expanding and educating the community as well as welcoming in new Monks. The monks have an awesome opportunity to be ambassadors for our ecosystem and i’m excited to be a part of it. Thanks to the rest of the mons as well as the awesome community we have here. Looking forward to more community feedback and suggestions/ideas of how we can continue to grow and bring new pipl into our ecosystem.