As a lender on Omm, I’d like to point out that, for myself personally, I do not need OMM incentives to lend. I understand the benefit to initially bootstrap deposits in order to have funds available to borrow, but at this point I feel that the OMM incentives to lenders are a waste of protocol resources.

As a lender, I can’t remember the last time I clicked “Rates with OMM”. I just don’t need to, because I scroll down and currently see these extremely high rates. I don’t even care what the OMM rewards are, because 40%+ interest on just my deposits are attractive enough. 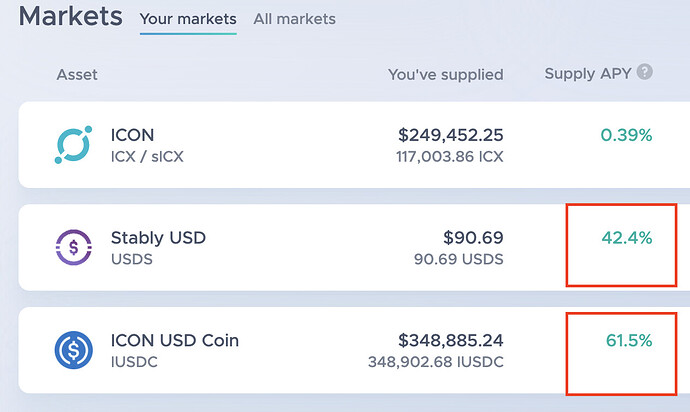 Therefore, by moving OMM rewards from lenders to borrowers, I expect the following effects:

Amount borrowed: increase → With more OMM rewards to offset their borrow costs, borrowers will be willing to borrow more and pay higher rates to lenders.

Amount Lent: increase → With an increase in borrow amounts mentioned above, interest rates will increase for lenders, therefore incentivizing more deposits. This is based on the assumption that lenders are not currently lending primarily for the OMM rewards. I shared one data point (myself) where OMM rewards have 0 impact on the amount I am willing to lend.

Additionally, borrowers are what generate revenue for Omm (and for lenders). Lenders enable it, but borrowers generate it. More borrow = more revenue. In banking, a deposit is a liability while money lent out is an asset. It makes more sense to incentivize the activity that generates revenue.

I’ll start this proposal with the following recommendation, but open to discussion of course. Personally, I think that deposit OMM rewards should be set to 0%, but will start with something less aggressive. There’s nothing wrong with gradual change (tho this proposal isn’t necessarily gradual).

Across all current markets (including the upcoming bnUSD listing):

Nice to see you active on the OMM forum as a user.

My feedback on your proposal:

I don’t have your firm banking background, but I can follow your reasoning regarding rewards for revenue generating activities, but banks don’t have a governance token either.

Love the thought process. Like you said the rewards are already great for lenders and it’s the borrowers who bring revenue.

Personally (and as an OMM user/staker/LP/lender/borrow) I’d vote yes and to more of an aggressive change.

Thanks for the reply @StevenDS, I’ll reply to some of your points below

This proposal would imo create even higher sell pressure on OMM. I take the assumption lenders are less likely to sell OMM then borrowers who need to cover their borrow interest rate.

This is a fair point, tho I think that’s more of an issue that needs to be solved with OMM token econ rather than inhibiting revenue to stop OMM selling. I don’t have a strong opinion on OMM token econ and don’t want to bring this thread in that discussion so I won’t offer any thoughts there.

I’m not convinced higher interest rates would attract more lenders. As you stated yourself, interest rates currently are already incredibly high, which would already serve as enough incentive to join as a lender.

As somebody planning on moving money to Omm to capture these rates, I can assure you it takes quite some time to go from USD in a bank → stablecoin in Omm unless you have a traditional bank that supports large wire transfers (mine does not unfortunately). I expect more deposits to flow in the coming weeks. Orbit Bridge being down also doesn’t help. Also, more promotion of these rates on a daily basis could help bring awareness to them, maybe even just from twitter algorithms.

Lending interest rates are high now, but I still remember a strong dip to only 5% a few weeks ago. OMM rewards for lenders was what kept supplying interesting. I don’t think we can assume these high interest rates to be a given.

I don’t see this as a major problem as it doesn’t effect revenue unless I am missing something. If lenders pull out because rates are too low, but borrow stays the same, then revenue stays the same.

Thinking this through and I would definitely vote yes on this proposal.

Across all current markets (including the upcoming bnUSD listing):

I would like to offer an alternative solution to Scott’s proposal, that could be saw more as an “A/B” test rather than core protocol change.

Since theoretically there should be similar demand for stablecoin markets I propose the following for iUSDC and USDS markets:

If this change is made I suggest a snapshot of the # of lenders/borrowers, TVL and rates to compare with future statistics to determine if this is the correct path forward for Omm and how it incentivizes its markets.

I like this approach of A/B testing. Let’s take it a step even further now that bnUSD is added on Omm.

I also agree with @tj_hunt and @oDK on the A/B testing approach. I like the breakdown proposed by @oDK as well.

If possible, perhaps tracking revenue generated for the DAO would be helpful as well.

Conceptually I don``´` t think OMM token should be perceived or marketed as fiat yield though. It is the governance token and it should be distributed fairly so the DAO has a strong community taking decisions.

But @tj_hunt idea is a good way to measure effectiveness (growing the protocol it’s all we want), and @oDK offers a nice middle ground.

I would vote yes to that, but I would test it for a long time.

Lending interest rates are high now, but I still remember a strong dip to only 5% a few weeks ago. OMM rewards for lenders was what kept supplying interesting.

This is a good point too, if rates drastically dropped, as a lender I would be tempted to just remove my supply and put it to work buying BALN or ICX (for example) and putting my capital to work for better yields.

I’d like to offer a counterpoint. (and agree partially with @StevenDS and @Rook5677 )
Full disclosure I am not currently holding any voting power and only hold omm in LPs so take that however you will.

Flat rewards for suppliers is more important than flat rewards for borrowers. They offer an important balancing factor, should the supply of a particular asset drop drastically, even with no borrowers, the reward will increase to encourage new supplying. It may seem unecessary when relative ultilisation is high and drops in supply cause it to spike into the… whatever zone that is past the 80% mark.
I believe a incentive factor that is not a percentage of amount supplied is important as a balancing factor, if supplies are low, its significant, if supplies are high, it is a drop in the bucket. Not to say that the amount is too high/too low, but that its existance is important. Fundamentally the omm supplier rewards are a flat cost, as long as that amount is reasonable, a flat cost is great.

On the other side of the coin, over-incentivising borrowing is just selling omm by another name. If people are borrowing for their goals, thats ideal. If the incentives are such that the effect is to raise borrowing artificially, the net effect is these:

There is a slight difference in this scenario, the value of extra borrower rewards, which incentivises additional borowing, which generates additional interest, is basically selling omm for whatever other assets those are, and giving some to the suppliers and some to the DAO.

I think with this dual issue of losing a balancing force in supply, and distorting market forces, that 0/100 is unlikely to be optimal. Not saying at all the current mix is optimum so a change could still be warranted. At the very least I would argue strongly for there to always be some level of reward for suppliers as a backup to dynamically balance any unforseen flucuations.

As the price of Omm continues to fall, I don’t think that handing over Omm rewards to borrowers will result in bigger loans.
I think it is meaningful to implement such a proposal after a plan to eliminate the downward pressure of the Ohm price comes out first
I don’t think it will have much meaning if it is not preceded.

There is a slight difference in this scenario, the value of extra borrower rewards, which incentivises additional borowing, which generates additional interest, is basically selling omm for whatever other assets those are, and giving some to the suppliers and some to the DAO.

One thing you’re missing in this breakdown is the psychological effect. You could say this for any rewards program. Why not simply do an ICO and use funds to supply your own liquidity? Why pay liquidity providers in your governance token, when you can just sell them your governance token in an ICO and use proceeds to supply liquidity? Why give away rewards depositors when we could just sell OMM on the market for USDC and supply it ourselves? Incentivizing any behavior could be replaced with “why not sell your token and do this behavior yourself”. And the answer is always to grow a user base imo. It creates brand loyalty among other things.

As for the points by @Rook5677 and others about supply going too low because of yields going down, I would say that if people remove supply, then yields naturally start to go up for the same reason that having some OMM rewards there would help keep some supply. As people pull supply, yields go up for those that stay.

Bringing it back to high level, the entire reason I brought this up was looking at my own behavior. I personally have not ever needed the OMM rewards that this protocol has given me, I’d be supplying stablecoins and earning yield if I had 0 OMM rewards. I wanted to share that fact and see if the DAO wanted to make a change based on that fact. Maybe others would look at their behavior and notice the same thing.

As for next steps, I would support a proposal as outlined by @oDK, where we test varying degrees of this change to see the effects over time.

One thing you’re missing in this breakdown is the psychological effect.

I agree with everything following as well.
I was more arguing from the direction that doing that way is both more likely to result in selling, and also more ‘like selling’ as the suppliers are getting more non-omm assets instead of their supplied currency + omm.

Is the supplier distribution not exactly that, the psychological effect? Why not apply the same effect to both suppliers and borrowers isntead of just borrowers?
Additionally I am not arguing against altering the ratio, but do strongly believe some sort of flat base supply reward can adjust incentives for supplying automatically in the case of unexpected changes in the market without going through a governance process.
You mention behaviourwise you do not need the omm rewards to supply, but also acknowledge that by shifting the omm rewards to the borrowers it should increase rewards to suppliers anyway.

Additionally, borrowers are what generate revenue for Omm (and for lenders). Lenders enable it, but borrowers generate it. More borrow = more revenue .

In that case I think having a small bit of that reward in omm, is much preferred for exactly the psychological effect, and again dynamically shifting incentives.